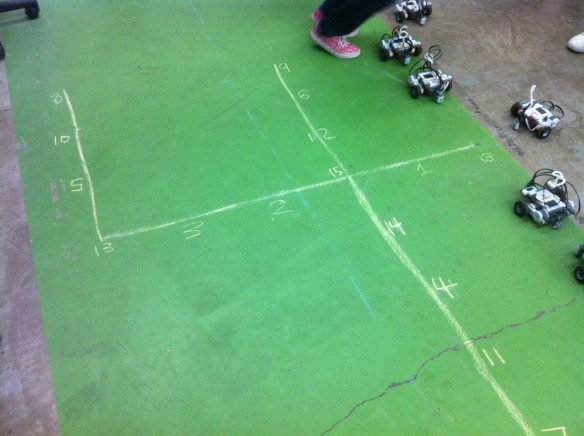 After my class completes the Wave I like to challenge them to come up with their own project.  This has turned out great for me because the students are choosing what they want to do and if there’s something new they need to learn they are (usually) eager to learn it.
My recent class chose to make the number “4” because they are my period 4 class.  So we began by mapping out our original concept on one of my whiteboard walls:

This is a little messy because it’s a collaborative effort between myself and my class and like all good projects we made many corrections and revisions.  First we drew the number and decided how many of our 15 robots would make up each part of the “4.”  Then we wrote the number of each robot (my robots are all numbered in permanent marker) in the space where they would end up.

Then students measured the length of my green rectangle and located a starting point and end point for our line of 15 robots.  They divided this distance so that each robot would be placed equidistant from each other and we made marks on the floor to indicated where to line up.

We agreed to use the sound sensor to start and to drive at power level 50, then students had a few days to work on their own robot’s movement with their partners, without worrying about timing.  It took a few days for most students to get their robots to end in the correct place.  If you’ve dealt with older NXTs, you know precision and consistency are not their hallmarks, especially since this was a beginning project and we were not using PID or sensors.

Then the hard part began.  We had to figure out timing for our robots so that they wouldn’t hit each other but also so they would look cool executing the shape.  We went through several iterations on this and at several times we had to just run a few robots at a time to get them to work properly.

As I stated before, getting the timing right was the hardest part, one robot too fast or too slow could make all the difference.

In the video below you can see how just one or two robots with poor timing or a bad turn can throw the whole thing off:

The next two videos show just how close we were getting after a few days.  Frustratingly, tantalizingly, close.

And in this one a student picked up her robot when I think it would have made it:

Finally when we were as close as we felt we were going to get (and with teacher imposed time constraints) it was time to do the last run.  The green rectangle was actually painted with chalkboard paint, so it was easy to erase the chalk “#4” and yell at our robots one last time.

For those of you who are interested, this is a 7th grade Introduction to Robotics class using LEGO Mindstorms NXTs.  Next year we’ll have EV3s (I’ve seen the purchasing invoice!).  I have this class for 13 weeks (which teachers know really means 12) and this project took place during the 3rd and 4th week of the class.